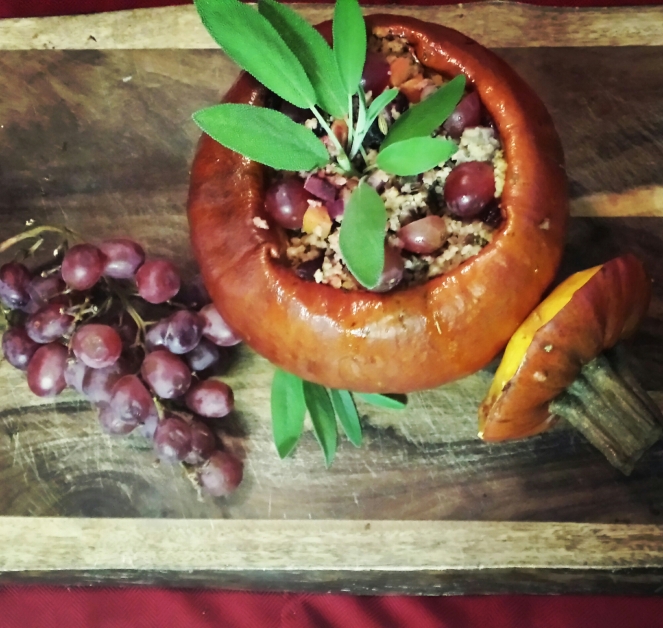 Sooo. This year we went for a healthier centerpiece to our Holiday table! It was a move I wasn’t too sure would go down too well with the family , but I was so pleased it was a big hit ! Growing up in the Uk Pumpkins were only ever a big deal when it came to Halloween. You carved them and that was that. Poor little unloved Pumpkins. After my move Stateside I learned just how beautiful and versitile these babies really are. And a whole new kind of love was born!
Along the way I was also taught that Pumkins are also high in vitimans A and C aswell as being a good source of beta carotene too, so who can argue with that?? I heart Pumkins….

So obviously with my new found obsession , Pumpkins were the first thing in my mind when my plant based Thanksgiving was penned .. so here’s what I did:

I choose a medium sized pumpkin. It was one of the little “pie pumpkins”. But have done similar things with very small pumkins too! 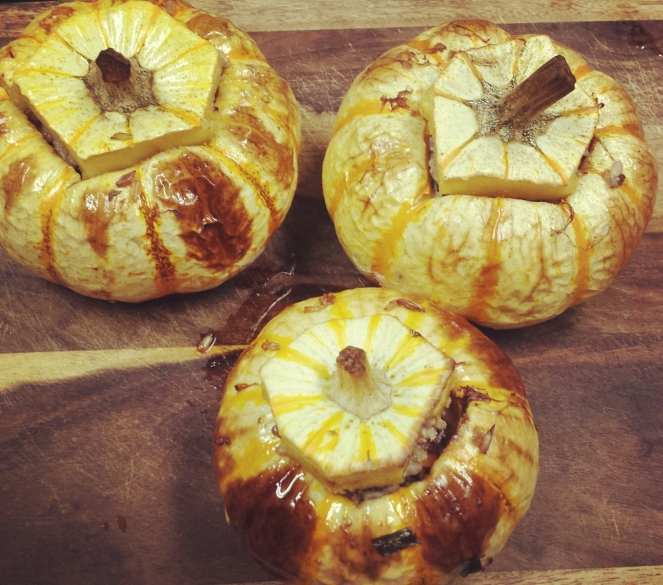 So in keeping with the Thankgiving theme , my centerpiece had to be spectacular. I just had no clue what to fill it with. …

So I went with everything that looked pretty at the Farmers Market. Sound plan right ??

For the Pumpkin:
1 Medium Pie Pumpkin
Oil of choice for roasting. (I use Avacado)

The stuffing is as follows :

Put the oven onto 375°.
Then cook your grain or seed. Whils that’s cooking hollow the Pumpkin (seeds can be roasted later if you’d like ). Make sure to keep its little “lid”. Once the pumpkin is nice and empty give the inside a rub with your oil. Then pop that beauty in the oven ok a tray “lidless” to give it a head start on roasting. My pumkin took about an hour and a half total for the flesh to be nice and tender.

Right. Next onto the stuffing ! Chop the Carrot , beetroot and Red Onion into similar sizes. Chuck them in a sauté pan with a good glug of your oil. I prefer Avacado so I know it’s safe at high temperatures. Let everything cook for a few minutes until some colour is on the veg. Then add in your diced Portabello and garlic too. Once everything seems happy and is not quite fully cooked , add in you grain or seed that previously prepared.
Give everything a big stir and add in thr chopped sage , Cranberries and Pecans. Remember to season with salt and pepper too. Check for herbs and add a little more if necessary. Drizzle the Tahini over and add enough of your milk or cream to stop everything from getting too dry. (A little drizzle of Honey or a sweetner can be good here too just to enhance the sweetness of the root veggies).

Now that you have everything prep’d make sure the Pumpkin has had a good 45 minutes head start roasting.

Then … the fun bit !
Be very careful lifting the Pumpkin out and stuffing it , it’s going to be hot ! Then (using a large spoon is best) stuff away merrily!!

Pop the stuffed pumpkin back in the oven , complete with lid for another 45 minutes.

I recommend when the Pumpkin cooked you give it a little resting time to cool before carving.

At this point I popped it’s little lid off and topped with some chopped grapes amd pumpkin seeds for a fresh burst of colour and flavor.

This will definetly be on my holiday table again!! 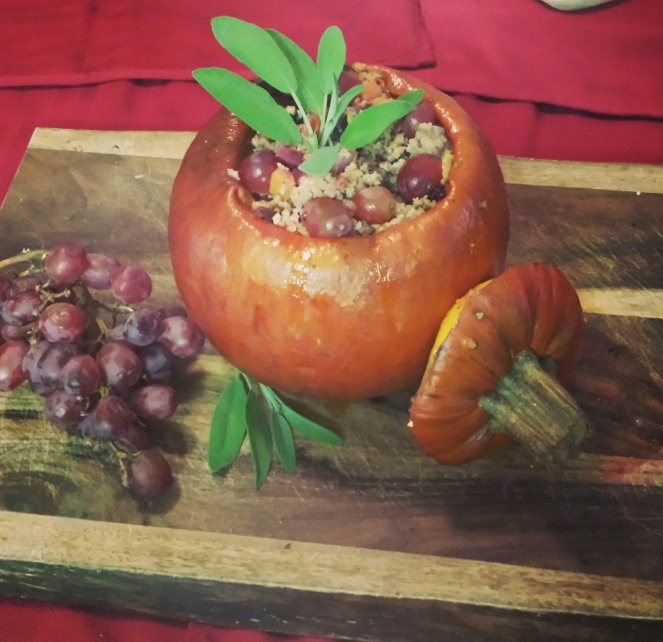