I’m so lucky to have such lovely friends. I got his beautiful tea towel all the way from Australia , just for me 🙂 . There’s something magical about an unexpected package or letter. I made a showcase of this one yesterday as another one of my lovely friends was popping in- this one all the way from Dublin! We’re a pretty international bunch!

So for an afternoon snack with my old friend, I embarked on some Lemon and Blueberry Swirls. Mainly because we had alot of each in.

Filling :
1 Punnet of Blueberries
1 Lemon
Agave or Sugar to Sweeten

Ps : if refined Sugar isn’t your thing , topping these with a Vanilla Cashew cream would be great too .

To start the dough  warm your milk gently till its luke warm. Add  tsp of sugar or agave to the milk then add your yeast (just helps the yeast ) Leave this for 10 minutes while you measure out the rest of the ingredients for the dough. Pop the flour in a stand mixer with the paddle attachment. (You can make this on a bowl but you’ll need to be good at kneading :). Add the salt , then start the mixer turning and add in your Milk mixture , Oil, Vanilla and Agave. Let this all incorporate to one large ball.

The dough will need to rest for an hour to puff up in size !  Leave it somewhere dark and warm.

Whilst that rises you can make the filling , chuck the Blueberries and Lemon juice in a non stick pan bring everything to a boil and let it bubble for a few minutes add some agave or Sugar if needed. Then pop that to one side to cool. You want it cool when you fill the rolls , it will thicken a fair bit too- it won’t be jam though so you will get messy!

Prep your baking pan with a good spray of oil and pop baking paper in the bottom . And put the oven on 350°.

Once dough is puffed up and filling is cool it’s time to get rolling .

Roll the dough into one large rectangle , and spread the filling on. Then roll along the longest edge. This will be messy I promise. Then slice into rounds ( I wiped my knife between cuts but im not sure if that actually helped the mess at all) and pop straight into the pan a little way apart as they will puff up.

Give them a few minutes to rest again before popping them into the oven for about 20 minutes. Keep an eye on them.

Once they come out leave to cool until you can handle them then lift out to add the icing/frosting.

In a bowl mix Confectioners Sugar (icing sugar ) with the lemon juice. Then add enough Milk to make the consistency that you like. I like mine quite thick so didn’t need much !

Then I added a final adornment of some zest and some chopped Almonds , I always like to add nuts on top of an item that has almond milk in, just so people know it’s there incase of allergies.
These are lovely served still a little warm ! 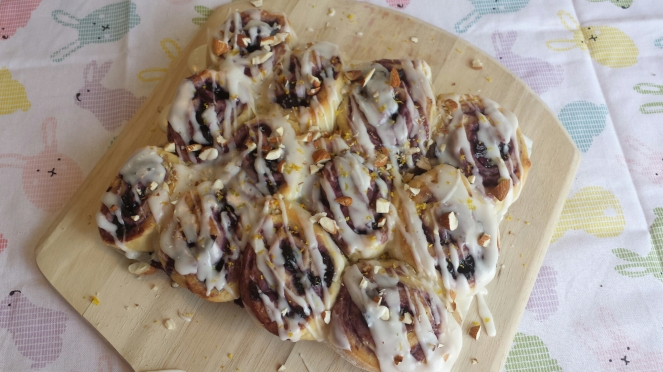 One thought on “Blueberry and Lemon Swirls. Easter is nearly here ..”