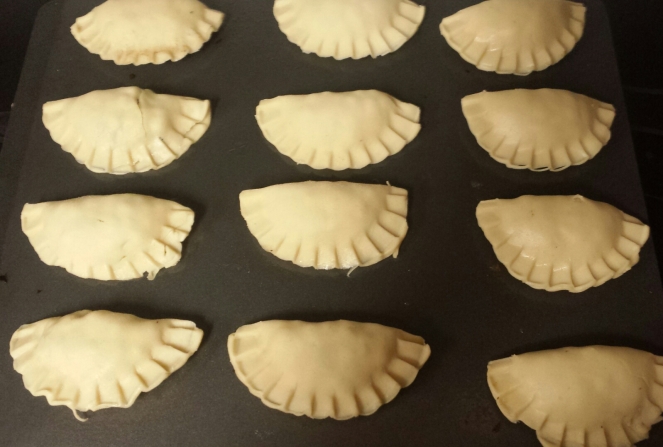 Guess who got a new toy?? Shopping around when I find this unbelievably cute little set of three baby pie moulds. Well naturally it was love at first sight. (I mean who wouldn’t fall in love with me …) So off I went to the till already brimming with sweet and savory filling ideas. But one idea I had in mind that had managed to fail with filo dough , leapt in my head and voila a mission was set.

And taddaaaa! Baby empanandas! I was beyond excited at how cute and easy this was. My empanadas sway from tradition as I used a pie pastry and baked them. Me and a pot of boiling oil would just be a disaster waiting to happen ..

I had some vegan ready made pie crust from a store online too. So it made the whole thing very easy! The filling can be made in advance also this could be a good make ahead recipe .

Preheat the oven too 400° whist you chop the sweet potato into 1cm ish cubes. Throw them into a bowl with the oil and a good sprinkling of salt. When the ovens ready roast these for 25 minutes ish. While they’re cooking defrost the peas.

When the potatoes are ready leave them to cool. Once cooled to touch throw in with the peas, Jerk seasoning , tamarind puree and fresh Thyme. Give another sprinkle of salt and taste for seasoning. Leave them to once side for the flavors to mingle while we start the fun stuff.

Roll the dough to about 5 mm. And start cutting in circles at the size you want. Remeber these are being folded around a filling so not too small. Mine were 4″ and I could use the back of the cutter. But you can make these without my little toy too so don’t worry. Once I had all my circles cut I turned my press over and got filling. The filling should be pretty cool now , you don’t want it warm or the pastry won’t crisp up.

I put about 1 heaped tbs of filling per pastry and squished them together.

If you haven’t got one of these little presses , put you’re filling on one side of the circle and fold. Then crimp the edge with a fork .

Once they were all done I put them on a non stick baking sheet and popped them in the fridge till I was ready to cook then later that evening.

When I was ready I preheated the oven to 400° and threw them in for about 15-18 minutes till they were golden brown all over.

These went down pretty well. I can see my new toy being a regular in kitchen from now on !